Places To Visit In Hampi - Karnataka

Known as the keeper of ancient ruins and glories, Hampi is a small captivating temple town situated along the banks of the Tungabhadra River. There are many places to Visit in Hampi, which is a gateway to the bygone eras, transporting you to the reigns of medieval kings and emperors. Surrounded by the remains of the historical city of Vijayanagar, Hampi is a treasure-house of ruins, monoliths and boulders.

There is an abundance of Hampi Tourist places. Steeped in 1,400 years of history, Hampi is a must-visit destination for tourists, pilgrims and culture aficionados alike. You can visit the historic Hemakuta Hill temple with various stunning archways or experience the old-world charm of Gagan Mahal.

Along with shopping traditional handicrafts at Hampi Bazaar, you can also visit the religiously significant Virupaksha Temple. While the Archaeological Museum has many artifacts and relics, Matanga Hill is famous for its beautiful sunsets.

Here are descriptions of a few tourist spots in Hampi:

The Virupaksha Temple in Hampi is dedicated to lord Shiva. The architecture of the temple is very beautiful and magnificent. There is a monastery, three antechambers and filled the surrounding of the temple with small shrines. The Virupaksha temple has survived through the years and never ceases to prosper. It is still pristine amidst the ruins that surround it. It attracts large groups of people in the month of December. The yearly chariot festival is conducted in the month of February.

The Vittala Temple is in Hampi, Karnataka. The temple is a stunning example of Dravidian architecture and stands as a testimony to the exve Vijayanagara kingdom, once one of the greatest Indian lineages of great kings and rulers.The Vittala Temple is presumed to be the grandest of all temples and monuments in Hampi. The temple exemplifies the immense creativity and architectural excellence possessed by the sculptors and artisans of the Vijayanagara era. It is on the southern banks of the river Tungabhadra. Many people visit this temple, and It attracts a lot of people across the globe.

Lotus Mahal is one of the most famous architectural landmarks in Hampi. Its lotus-like structure immediately endears it to visitors and is a must-visit place. This building lies within the Zenana Enclosure, which was a segregated area used by royal women of the Vijayanagara dynasty. Also known as Kamal Mahal or Chitragani Mahal, the exquisite structure of the building boasts a central dome that is carved like a lotus bud.

Dedicated to Lord Hanuman, the Yantrodharaka Hanuman Temple gets its name from the image of Hanuman placed inside an amulet. The position of Hanuman is different from any other image of Lord Hanuman that can be found in Hampi. This temple is the second most important shrine dedicated to Lord Hanuman in Hampi. The Hanuman Temple situated on top of the hill on the bank of the Tungabhadra River can be reached by climbing up the steps. The idol of Lord Hanuman is kept inside in this temple in his meditative state, and when looked closely, one can view carvings of 12 monkeys holding each other's tails and facing backwards on it.

Hampi Bazaar is the place to go to pick up knick-knacks, souvenirs, cheap clothes and trinkets to remember your trip to Hampi by. Situated right in front of Virupaksha temple, hence its alternate name, this bazaar which stretches for over a kilometre long is one of the main landmarks of Hampi. From embroidered shawls, fibre handicrafts, to stone carvings, this is the place to pick up anything Hampi-related. The Hampi Utsav which happens every November is also a big tourist draw and should be noted.

Matanga Hill is one of the major places to visit in Hampi. It is probably the highest point in Hampi, hilltop which is the best spot to get an aerial view of Hampi and its environs. The view from the top is interesting, especially from the eastern side where you can get an aerial view of the Achyuta Raya’s Temple complex. The whole Matanga Hill tour is free of entrance fees or camera charges.

In Anegundi stands the regal palace, Gagan Mahal, which belonged to the rulers of the Vijayanagara empire. Also known as the Old Palace, the charming building is believed to have been constructed in the 16th century. Designed in an Indo-Islamic architectural style, the yellow-ochre palace is a sight to behold.

On the southern side of Hampi stands the Hemakuta Hill, its gentle slopes dotted with a large number of temples, archways and pavilions. It is said that the hill was once fortified with stone walls, the ruins of which can still be seen. Once you have reached the top (a 15-minute-climb), it flattens out like a small plateau. It is said that this is the place where the marriage of Lord Shiva and Goddess Pampa was finalised. The architecture of the temples on the Hemakuta Hill is quite different from the typical Vijayanagara style of architecture found in many other temples in Hampi. The Hemakuta group of temples have a distinct style of their own.

The Queen’s Bath in Hampi is a colossal bath that exemplifies the architectural excellence prevalent during the days of the Vijayanagara Empire. It is located close to the entrance of the Royal Enclosure in Hampi. The whole building is made with a veranda facing a big open pond in the middle. Projecting into the pond are many balconies. An aqueduct terminates in the pond.

The balconies are decorated with tiny windows and supported by lotus bud tipped brackets. The whole pool is open to the sky.

Daroji Sloth Bear Sanctuary is the only place where one can spot these Sloth bears, who are the honey-lovers endemic to India. The sanctuary is located in Ballari District. The Sanctuary has rough terrain and during the visit, tourists can spot animals like jackals, wild boards, mongoose, black-naped hares, leopards etc.

Places To Visit In Hampi - Karnataka

Known as the keeper of ancient ruins and glories, Hampi is a small captivating temple town situated along the banks of the Tungabhadra River. There are many places t 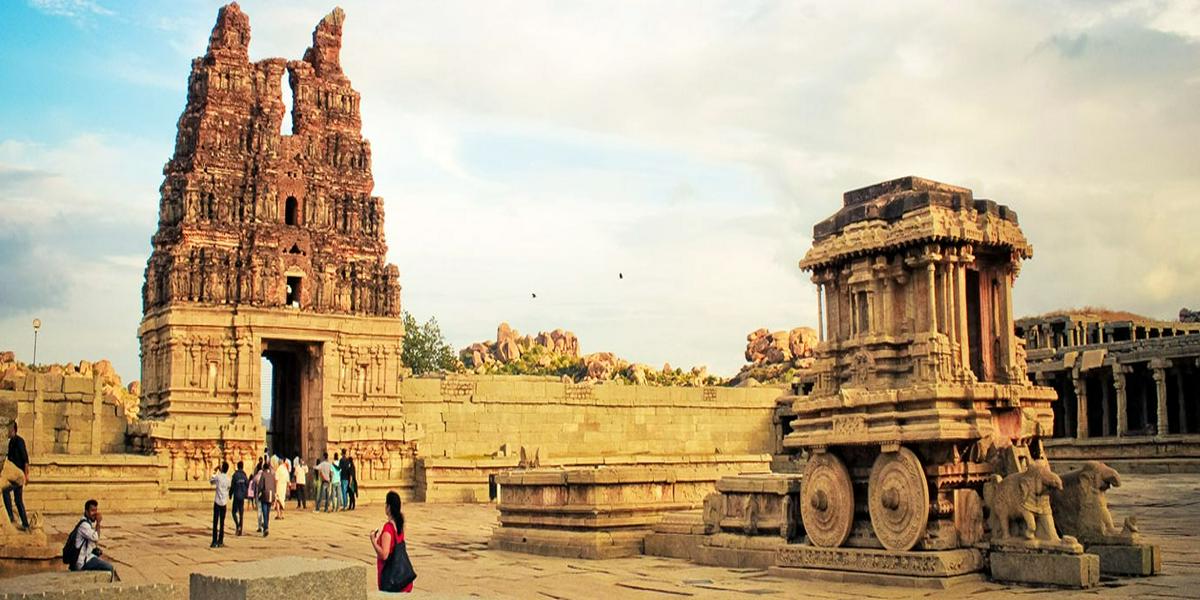 Hampi better known as the world’s largest open air museum, after all these centuries testifies to the glory of the Vijayanagara Empire. The still-standing monuments, with their carefully articulated design and sculpture, pay tribute to the opulence and grandeur. The iconic Stone Chariot and the legendary musical pillars within the Vijaya Vittala Temple: which, as the legend goes, was built for Lord Vishnu himself and the ancient Virupaksha Temple which is believed to have hosted the betrothal of Lord Shiva and Parvati; and countless other monuments steeped in history are what stand as background to the Hampi Heritage & Wilderness Resort.